Surprise! Mark Ronson added to the line up!

Last week we’ve announced the complete line up of the 27th Dour Festival.

The icing on the cake: Mark Ronson confirmed a unique and exclusive show in Belgium this summer!

The producer and mastermind behind the worldwide hit single Uptown Funk will be funking up the place on thursday July 16th!Okay, this is perhaps not a big deal for us,because we focus on the cannibal stage Roger Miret and Vinnie Stigma are lynchpins of New York Hardcore (NYHC), and their band Agnostic Front played a key role in defining, shaping and establishing the cultural code of conduct for the still-thriving movement. Film and music video director Ian McFarland (Rungs in a Ladder: Jacob Bannon, The Outlaw: Dan Hardy, The Problem Solver: Joe Lauzon, Meshuggah, Killswitch Engage, Fear Factory, Agnostic Front) is crafting an intimate portrait of these two men – two of the most respected individuals in the 35-year history of hardcore punk music – dubbed The Godfathers Of Hardcore.

Miret and Stigma have remained close friends through great adversity that often threatened their very existence. Today, Roger and Vinnie are primed and reaching into 50’s and 60’s, balancing jobs and families, in addition to an upcoming touring schedule that will take them all over the world. The Godfathers Of Hardcore will serve as an up-close-and-personal look into the lives of these different yet inseparable musical icons, and in the process will illustrate the tenacity, optimism and enthusiasm with which they both approach their band to this day. Since the beginning, Miret and Stigma took on the system with fists clenched, and throughout the decades, they’ve maintained the powerful and youthful (if not as destructive) mindset that started it all.

The Godfathers Of Hardcore is already in the midst of production and features intimate footage captured by McFarland over the past several years, but to do the story the greatest justice possible, director Ian McFarland is reaching out to the band’s diehard fans, offering them a chance to join in supporting the film via a new Kickstarter campaign, here.

The Kickstarter campaign will be ending on May 17th and features unique incentives such as an ESP Viper-100FM STBLK Guitar with backplate signed by Agnostic Front, custom Vinnie Stigma ringtones, a limited edition Agnostic Front skate deck, a personal Lower East Side tour with Vinnie Stigma, and even a “Kickstarter Executive Producer” credit on the film. The goal is to raise $15,000, and afterwards, some amazing stretch goals will be added (details coming soon).

Over the next three weeks, McFarland will be adding more one-of-a-kind incentives, in addition to giving updates on the project and filming. McFarland adds, “Unlike a large number of Kickstarter projects, our production team has already begun filming the movie and have shot a good amount of footage. We need this Kickstarter to help us with getting our film team over to Europe to travel with Agnostic Front at the end of May.”

Agnostic Front exists on a level all their own – a level of their own creation. Join director Ian McFarland in supporting his creation, his vision, and his story of one of the most influential bands of all time, The Godfathers Of Hardcore, and watch the story live on in film!

As a part of a potent subculture, Agnostic Front probably will never sit beside Aerosmith and the Beatles in the Rock & Roll Hall of Fame. Nor have they been showered with platinum records or the rock and roll riches reserved for acts that value popularity over integrity. Miret and Stigma are perfectly happy with the niche they’ve carved for themselves, and the effect they’ve had on an entire subgenre that had infiltrated both the counter-culture and impacted the mainstream. A recent article in the New Yorker about hardcore music quoted was named “United Blood,” after Agnostic Front’s first album. The band continues to play major slots on high-profile international festivals and their recently-released album, “The American Dream Died,” has earned the band some of its strongest reviews in years.

Agnostic Front’s past legacy is perhaps even more praiseworthy than their present accomplishmen
ts. The movement the band pioneered has had a profound effect on millions of fans and musicians, as well as skateboarders, bikers and other individualists who refuse to accept the status quo. In a landscape of increasing apathy and complacency, the messages Agnostic Front presents are as relevant today as they were in the ‘80s when the band members were impoverished, scrappy and ambitious, often fighting for their very survival as well as the perseverance of their volatile but highly inspirational band.

Back in the ‘80s, Miret and Stigma roamed the dangerous streets of NYC’s Lower East Side, fighting those who got in their way and laying down the gauntlet for the music they believed in and were willing to defend with their lives. At the time, they had no idea that the band that meant the world to them and the culture populated by runaways, street kids, punks, skinheads and other social misfits would also resonate with a generation of other music fans and musicians including Metallica’s Kirk Hammett, Anthrax’s Scott Ian and Pantera’s Phil Anselmo, not to mention Cremaster’s Mathew Barney and electronic guru Moby. Roger Miret, 50 (vocalist), a Cuban-refugee from an abusive home and Vinnie Stigma, 59 (guitarist), a second-generation true-blue New York Italian, found each other on the rough streets of NYC in the early 1980s, becoming fast friends and developing an unbreakable bond. Together, over the next three decades, they became the “Godfathers of New York City Hardcore” – creating a vehicle through which three generations of fans could grow, scream and band together as one in the face of diversity, violence and discrimination. Through the strength and bonds of brotherhood, Roger and Vinnie birthed something larger than themselves – they birthed a revolution.

Along the way, they experienced some of the most harrowing blows a band can endure, including various line-up changes, Roger’s incarceration and the subsequent collapse of the band. After Roger was released in the late 1990’s from New York’s Wallkill Correctional Facility, Roger and Vinnie reunited, picking up right where they left off. Still touring and recording today, Agnostic Front is the very embodiment of hardcore: endurance, perseverance, brotherhood, strength against oppression and the will to keep going, obstacles be damned.

Like every year on Groezrock,you can get your merchandise or posters signed by your favourite bands.
This is the time schedule for this year’s edition.
Make sure you are there on time,because you won’t be the only one who wants those autographs. There will be a waiting line. 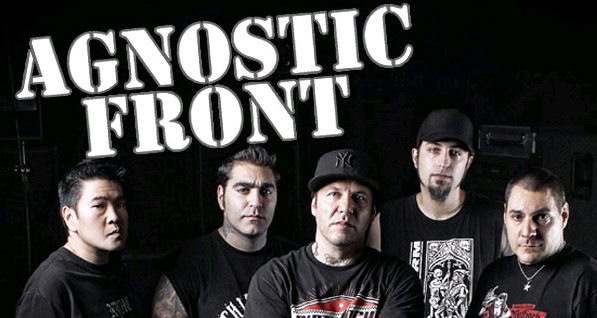 Agnostic Front would like to welcome Craig Silverman, our new guitar player to the family. He is no stranger to the hardcore scene. A true veteran, Craig has played for Only Living Witness, Blood For Blood, Ramallah, Slapshot and many more! We are proud, excited and happy to have him with us on our upcoming tour in Europe this coming August! See you in the pit!!!! WELCOME CRAIG SILVERMAN!!!!!!!!!!