The American Progressive Metalband, Iris Divine, released their double EP Convergence in 2011. In 2013 they released the masterpiece demo EP The Everlasting Sea. Iris Divine could count on the support from several big bands such as Katatonia, Orphaned Land and Fates Warning, not only on the CD’s, also on stage. The metal scene as well showed tons of support .

When asked to describe the band, you would place them somewhere between King’s X, Deftones, Alice in Chains and even a bit of Dream Theater. The band produces a powerful sound and you can hear right away they are a well-oiled machine.

They recently released their newest CD ‘Karma Sown’ on Sensory Records and it seemed the perfect time for us to strip down the latest work.
Here we go!

Track 1, ‘The Everlasting Sea’ is spot on with the sound, like said above. Nice powerful groovy  with some great additional breaking solo’s where they take the time to throw in some more calm mid-tempo parts.  Navid Rashid’s vocals are noticed right away thanks to the great reach of his voice. He also plays guitar and its spot on, once more. Unfortunately, we didn’t have the chance yet to see them live so it’s only a question if he can produce the same quality of voice, live on stage! 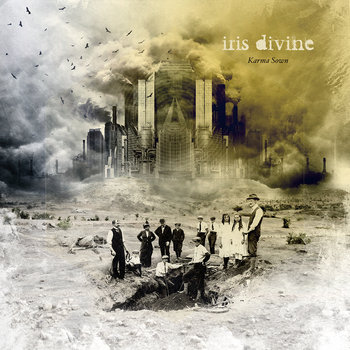 The second track on the CD is ‘Fire Of The Unknown’ possesses a heavy groovy riff that captures your attention and builds towards a moment where the tempo is completely turned around. Vocals are very raw, but yet again he is able to reach the higher octaves, giving the song a rather fresh sound with lots of variation to complete it.

Song 3 ‘A Suicide Aware’ starts of with a heavy intro voice. You can hear several voices mumbling, followed by a great bass line of Brian Dobbs, followed by Navids powerchords. This song shows you the different influences they have with all the great up-tempo parts and the lovely synthesizer tunes of Kris Combs who manages to make the song sound even more energetic.

On track 4 ‘Mother’s Prayer’ the band is able to show their versatility and take us on a psychedelic road with a very moody guitarsolo. For a second it  feels like we’re going back in time to the 70ies and the old skool Hard Rock, topped with a Irvin Divine sauce. Great stuff!

The 5th track ‘Prisms’ starts once more slowley to then reach a mid tempo gallop, tecnically into perfection, and a smashing solo that you want to hear over and over again.

Taking us to track 6, ‘In Spirals’ it’s clear to me this CD gets better and better towards the end, just like a party, where the crowd becomes more beautiful the later it gets! This instrumental song seriously gave me goosebumps, that’s how fantastic it is put together! Wow!

7th track ‘Apathie Rains’ is totaly the opposite of ‘In Spirals’. The sound is very apatic and instantly puts you back on this shitty planet, were injustice rules. The chorus takes the song as a twister! Navid Rashid opens up all registers on this one and he drags you allong with him in the powerful vocal abilities! Powerful riff, great drumming and then a spoken outro that slowly fades in the distance… What a great record this is!

‘In The Wake Of Martyrs’ is the final track on this masterpiece album ‘Karma Sown’
After some guitar chords and very dooming bass taps the song flows into impressive drumlines. The following riff is supported by synthesizer sounds that shine an extra light on the song. After this powerful intro you’ll get a unexpected break with a rather calm part, followed by a increasing tempo taking you to the ultimate climax of the CD.

‘In The Wake Of Martyrs’ is an excellent closing track for this great CD!